toukokuuta 18, 2015
This was my 3rd visit to Vienna. I suggested to my parents to book the same hotel in the Mariahilf area where I've stayed before with my friends, because from there I knew how to navigate to certain places. The shopping street Mariahilferstrasse was right next to the hotel and the Schönbrunn castle a short walk away. 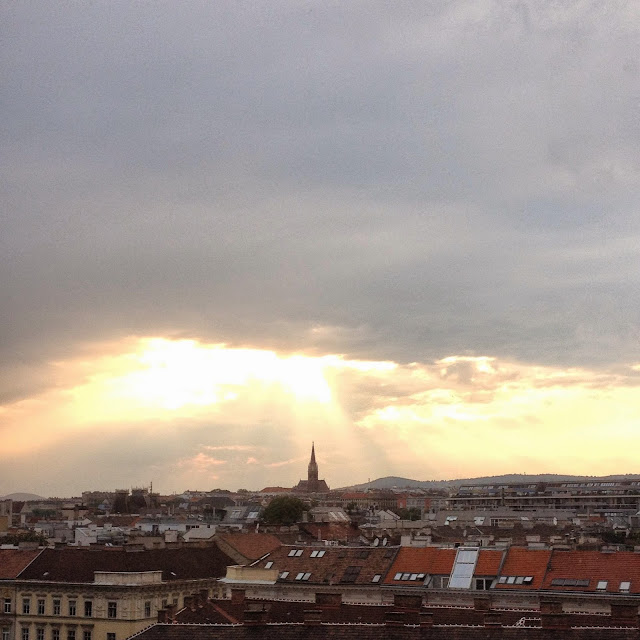 I was checking the weather reports for Vienna every day for a week and the closer we got to the weekend, the worse the weather looked. But despite all the promises of rain we hardly had any.

I went to meet my parents and my godmother and her husband to the Vienna airport. While I was waiting for them I thoroughly enjoyed myself watching people arriving and how their faces spread into wide smiles when they saw the people waiting for them. You can't help but smile yourself while watching these happy encounters. I hate flying but I do like airports. 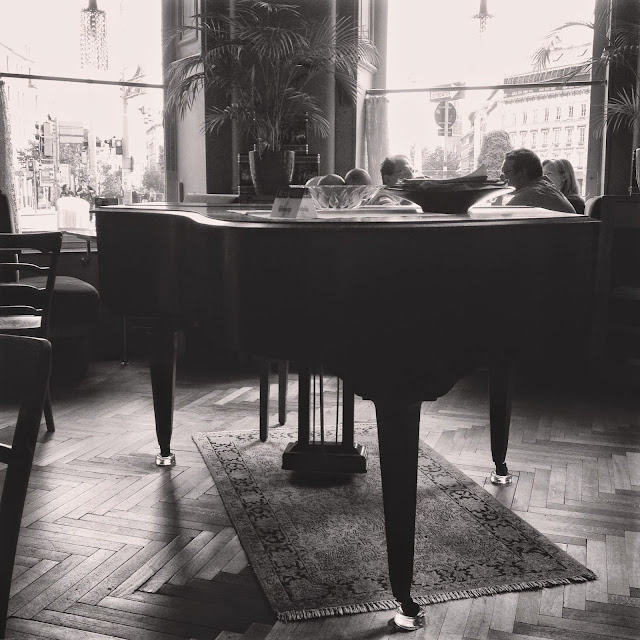 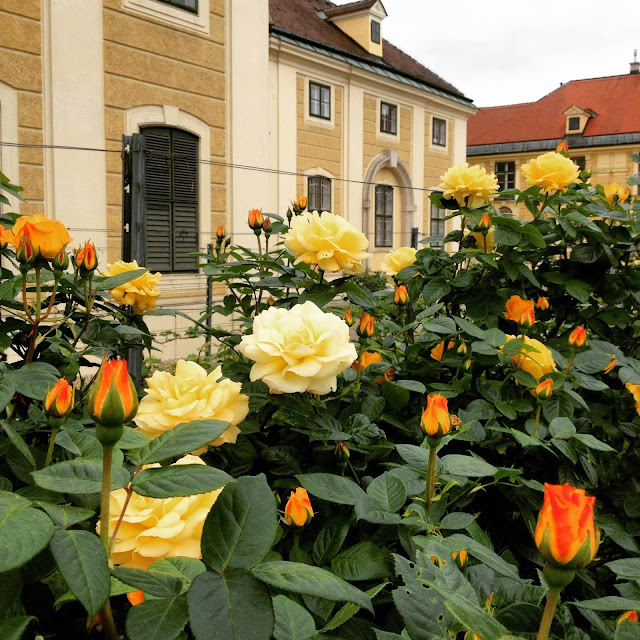 Because my parents had had to start their journey from Turku at 2am, the first day was a rather lazy one. We just walked around a bit, ate and had some beers. So, on Friday we were ready to roll and we started our Vienna tour by walking to Schönbrunn.

The last time I visited Vienna there were not so many tourists. Ok, there were a lot of them but this time there were A LOT of them. So many that there was no point taking a tour inside the castle unless you liked queuing for hours. So, we just took a leisurely stroll through the huge garden into the "backyard" with the Neptune fountain. There had been some sort of big concert in the castle yard the previous evening so the yard was full of parts of the lights, stands, stage and wires. Because there was so much technology around I couldn't get any proper pictures of the castle, but at least you can find pictures in my previous text about Vienna. 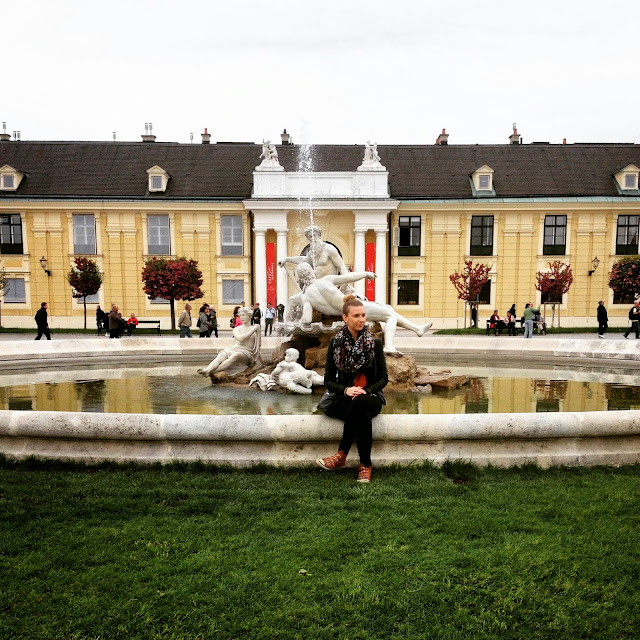 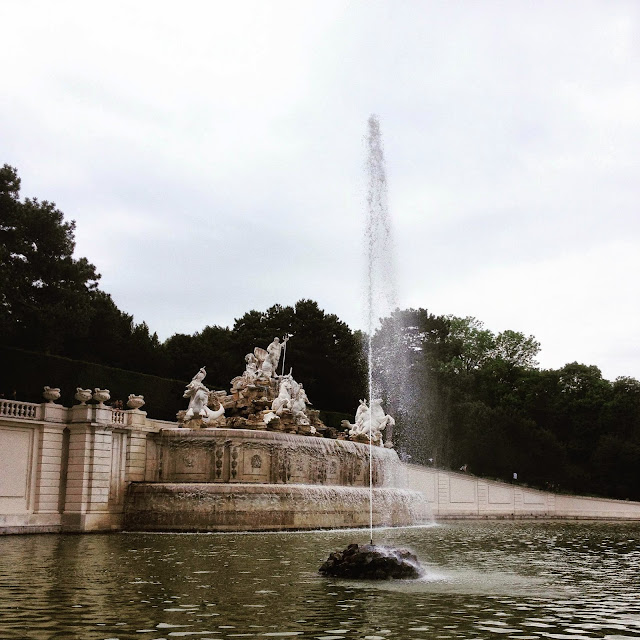 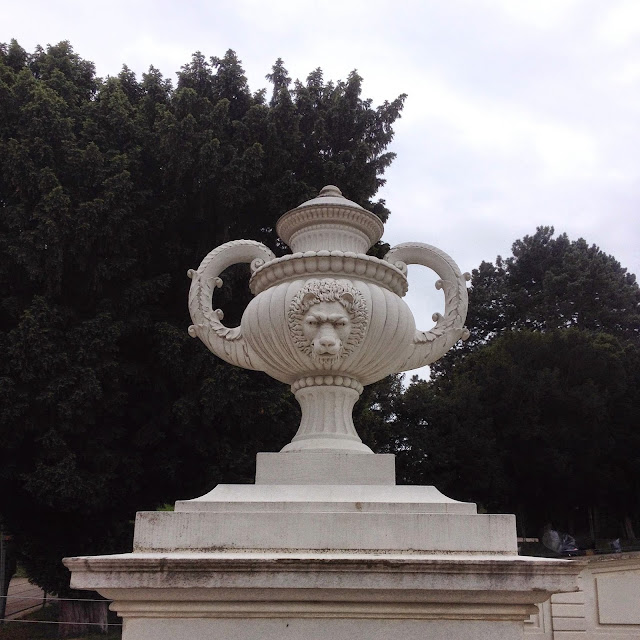 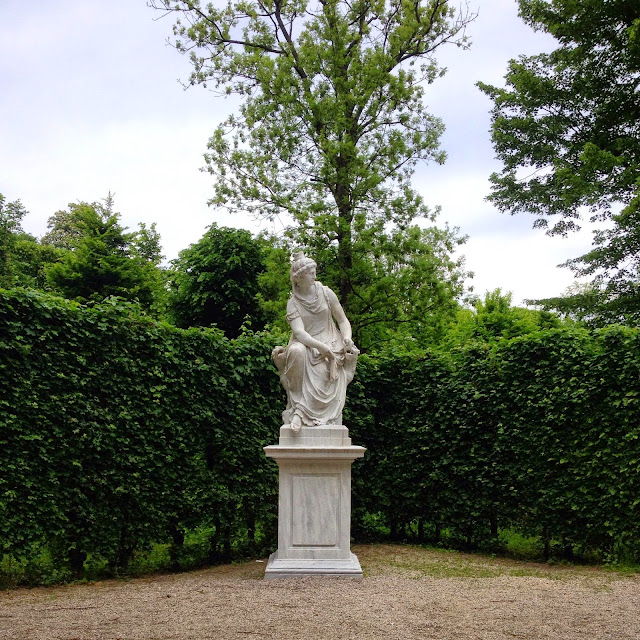 The park behind and around the castle is enormous. I didn't see probably even 1/4 of it last time. This time we went around different routes and there are all kinds of gazebos and statues and fountains everywhere. Maybe the best way to get a good picture of everything that's going on in the gardens is to pay for a ride with the horse carriages around it. 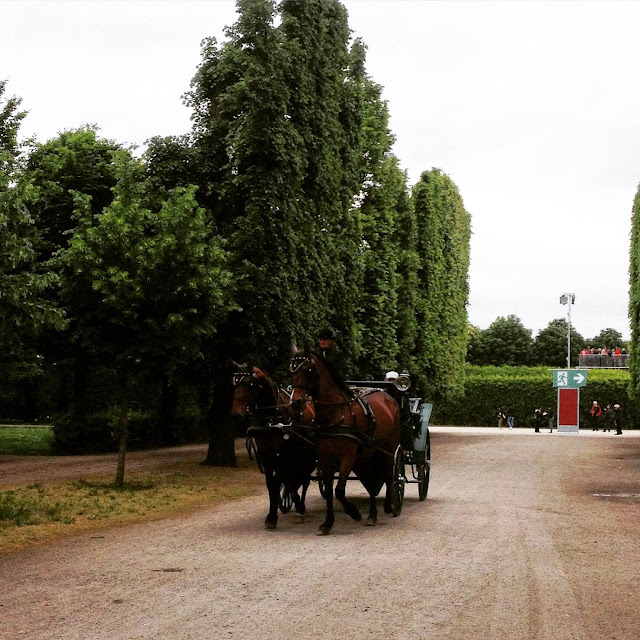 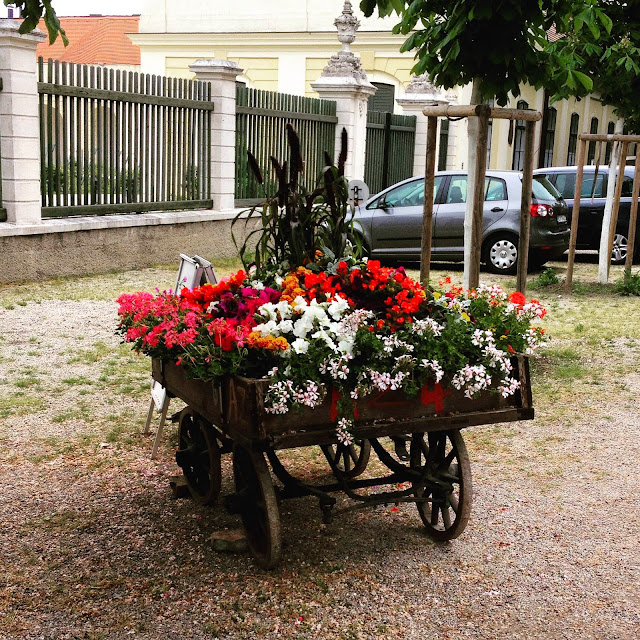 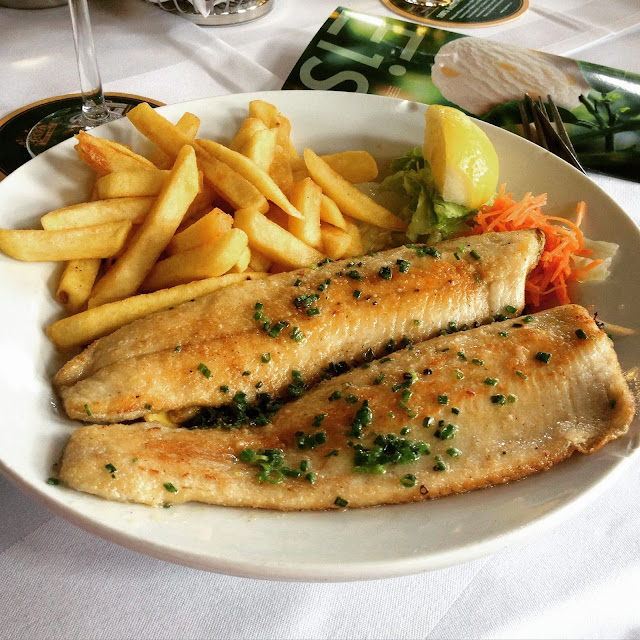 I've complained how I've been able to avoid all good restaurants in the big city, but this time I had much better luck. On Thursday we ate at the beginning of the Mariahilferstrasse in restaurant West End. The style of the place was very French and a bit fancy but still cosy. The menu was ridiculously long; about 10 pages full of options, some of them twice in different places. After a long contemplation I ordered a fish dish. There were options for the side dish but the waiter didn't ask and in the end I had fish with fries... Fries aren't my favourite thing to eat but the fish fried in a lot of butter totally gathered the points from me. Even though food was good the eventual experience was brought down by the waiters/restaurant: they charged us for aaabsolutely everything. Every single bag of ketchup that they brought to our table without us asking, the pretzel that me and mum ate from the table, where they were ready, every centiliter of wine. If we had had enough balls we should have said that there was no price tag on this bloody pretzel and since we didn't even order these ketchup we're not paying for them. But we did. Food 7/10, service 3/10.

On Saturday we ate in an Italian restaurant just behind the hotel. The food wasn't exactly mind-blowing but getting a pasta carbonara that hasn't been bathed in and covered in garlic before serving (as they do in Slovakia) was quite good enough for me. 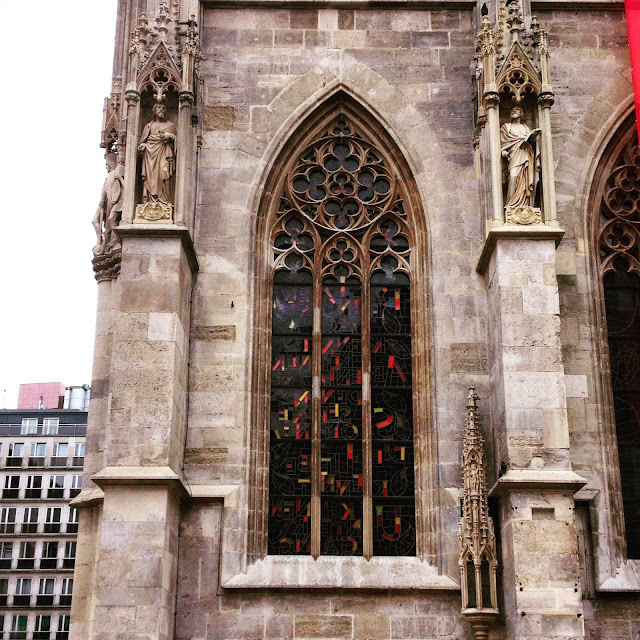 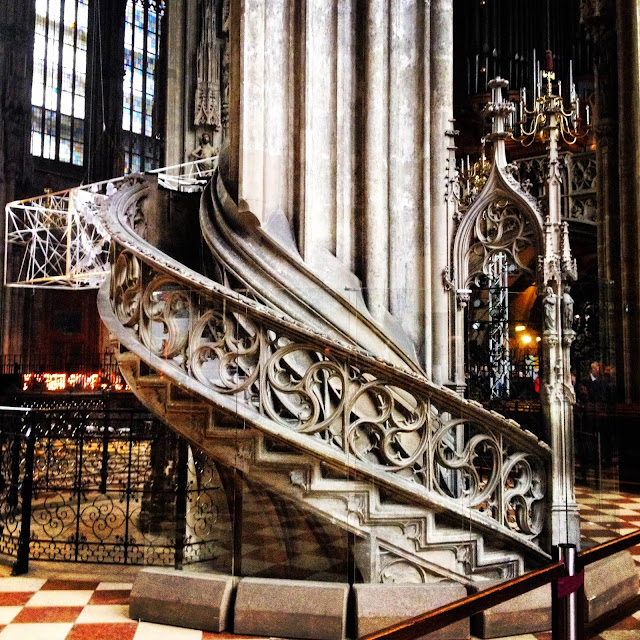 On Friday we also went to see the Stephansdom cathedral and stopped at a cake shop. Some people ordered cakes, I ordered a coffee named after Maria Theresa, of course ;) Black coffee mixed with orange liquor and topped with whipped cream. If you don't like sweet things don't bother with this one. For me it was just what the doctor ordered. But no, I did not add those sugars... 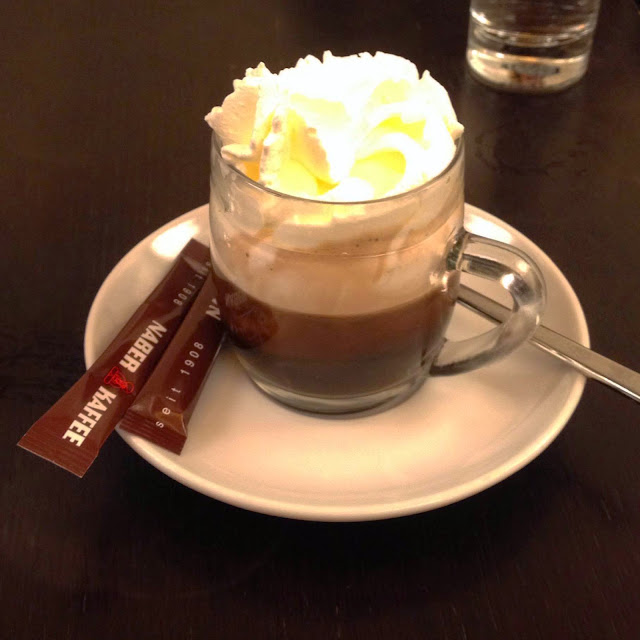 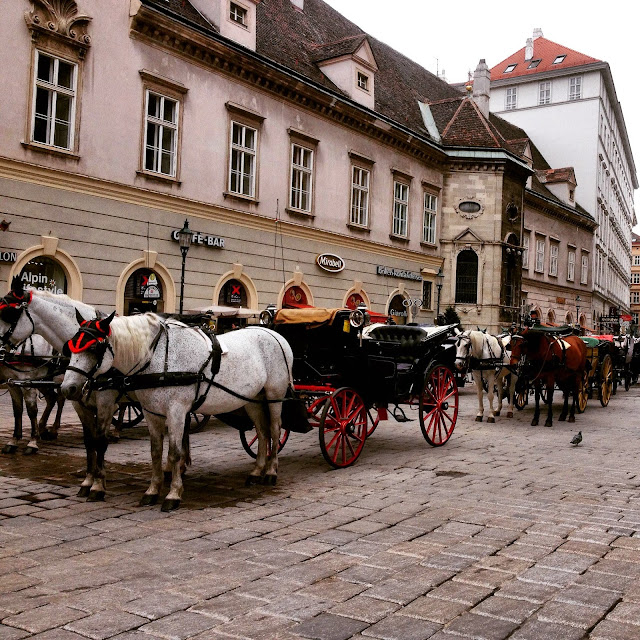 For Saturday I had booked a cruise around Danube but I will write about that later. I can just say that the weather turned perfect for at least one day and it was the right day for it!

After the cruise it was so late already that we went straight looking for a restaurant. People really love Italian food around here; about every second restaurant in the city was Italian. I was hoping for something else but Italian but then we came across this place called Dai Fratelli. Lovely terrace and a menu full of stuff that we were hoping for. And what was more, we had the best waiter I have ever seen! He asked straight up where we were from and gathered instantly what kind of humour goes for us. Sarcastic of course! You know that the waiter is doing his job well when our entire crew orders desserts. For me it was mascarpone foam with fresh strawberries and a second martini bianco. YUM! Even if the food had been bad we would've left with smiles on our faces. But thankfully there were no complaints on the food. For the good restaurant experience as a whole I have to give 10/10. 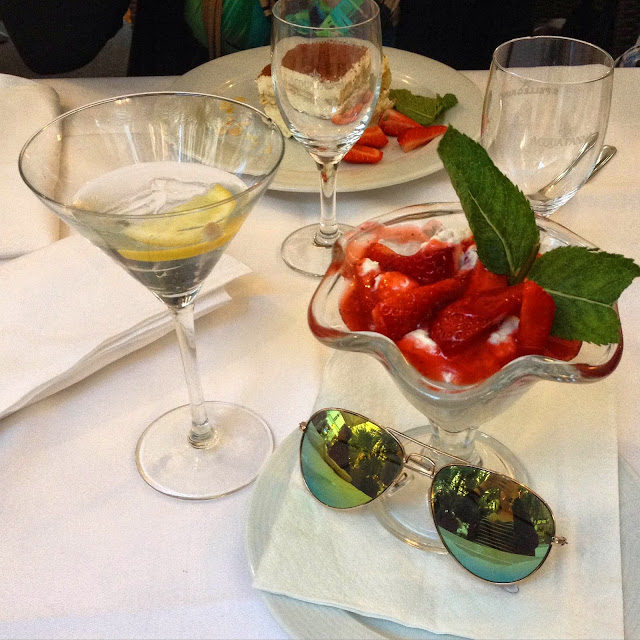 I like Vienna. It's a nice city to visit, especially now that I've started to finally "get on the map" there. It has something for everyone: history, architecture, art, music, international restaurants, events, shopping venues for all wallet sizes, etc. Still not the kind of place I would like to live in but it's very nice to have it right next to "my" city.

Next weekend I will visit a castle complex just across the border in Czech Republic and the weekend after that Budapest. But before all that I will still have to write about our summery cruise on Danube. Stay tuned...