heinäkuuta 31, 2015
My first ever proper summer vacation and I can't imagine any better way of spending it than the way I did!

Just before flying to Finland the cultural differences and the leaving of important people from Slovakia was getting to be too much for me to handle. So a month in the same country with the most important people and all the familiar, if still boring, things couldn't have come sooner. Weather was horrid all month (minus the first weekend) but I had so much dog therapy and a perfect balance between activities and doing nothing that I couldn't care about such things as rain.

Just after landing in Finland I started my vacation with a blast in Ruisrock festival. Sunshine, best friends and awesome artists, what else do you need to throw off all the stress and gloomy feelings of the last couple of weeks!

After the festival I was exhausted beyond any measure. So much so that before driving to our summer house I moved my wallet including my drivers licence from my festival bag into the bag prepared for the summer house without noticing doing it. And then I started looking for the wallet with the drivers licence and couldn't find it. So I made a call to freeze my bank card, called for a new health insurance card to be sent and prepared to go to the police station to order a new drivers licence... again.

Few days later just when I was getting ready to go to the police station in the morning I reached to take my lip palm and the hand mirror from the summer-house-bag to move them into the handbag I was taking with me and I saw a glimpse of blue and white and red... a tiny Union Jack... MY WALLET!! Couldn't have found it at a better time because if I had gotten to the police station I would've paid 50€ for a new card only to find the old one in the summer-house-bag. Some people might learn not to change bags every single day but no, not me :D 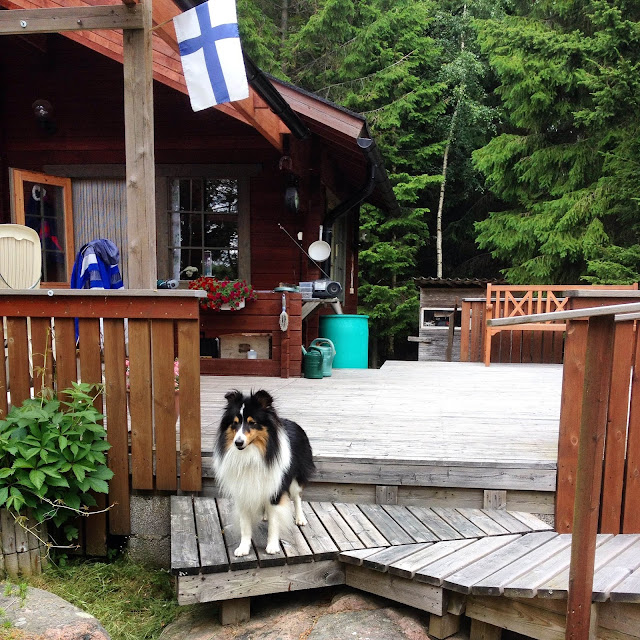 As said before a summer house next to the sea is a necessity for me. Hang your brain on a hook and just relax. To make things even more perfect I got to borrow my brother's girlfriend's dogs; two of the world's cutest energy packages. And one of them happens to be a trained therapy dog so if in need of a hug this fur ball, unlike most dogs, allows you to hug him just as long as you like. 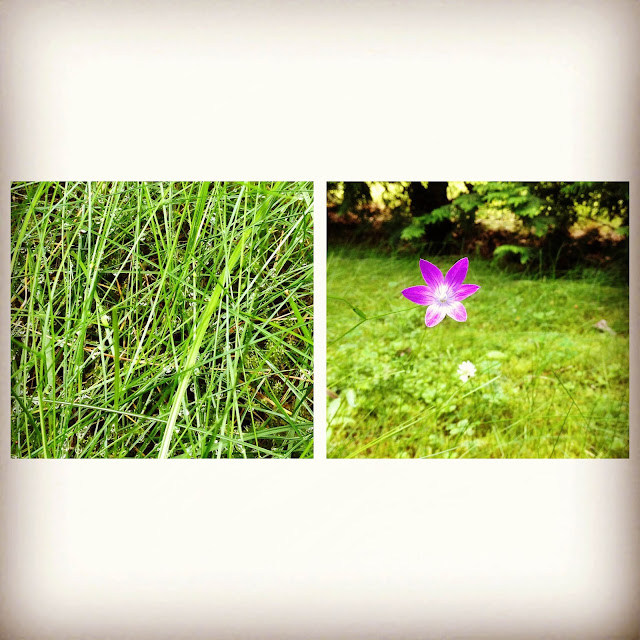 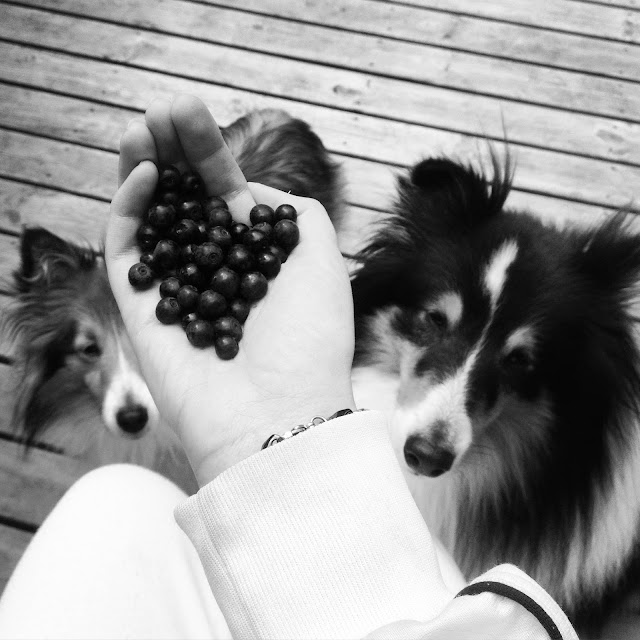 So, it rained eeevery day. Not all day, thankfully, but still. A good thing about this was that there was an abundance of blueberries all around our summer house! Usually you have to walk deeper into the forest to find them but not this year, just jump off the terrace and  you're surrounded by the sweet super-food. Good for dogs as well!

The only thing I missed was being able to go sit on the dock by the sea with a book... Maybe next year. 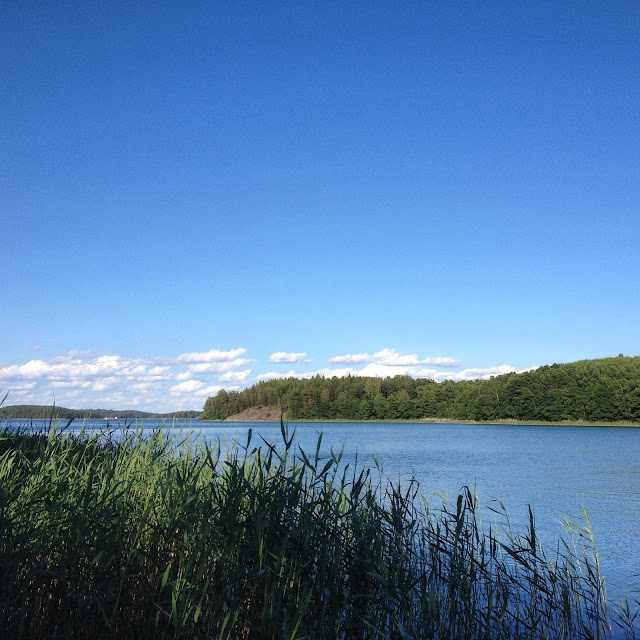 I had an opportunity to go riding a horse after about 16 years and since I've been wanting to do that for couple years now I jumped for the opportunity! As a little girl when I used to ride I was never allowed to do the saddle or the stirrup straps so I was happy to do them myself this time, even though I was quite lost with them at first. Technical stuff them! Also getting onto the horse's back proved more complicated than I remembered. I couldn't quite find the muscles on my legs in order to push myself up there so it took me three tries... embarrassing. 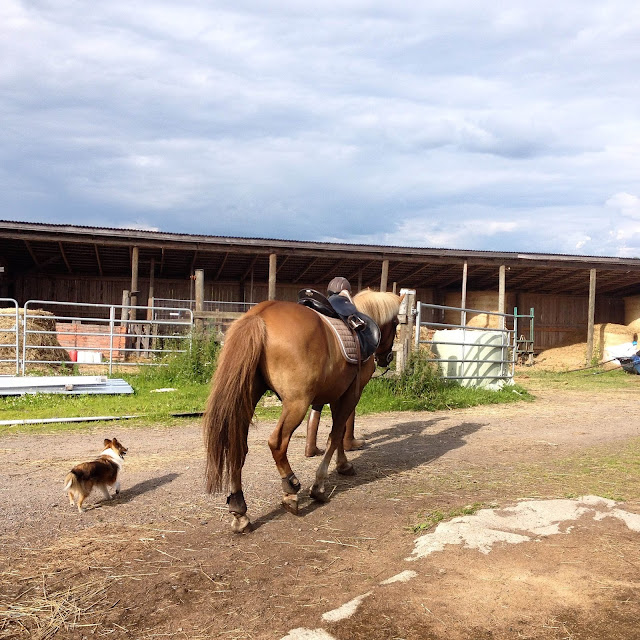 I don't know how I could've forgotten how much technique riding a horse requires! Little things, like keeping pressure on the horse's sides with your calves all the time in order to keep it moving took a little refreshing. All I was thinking about was "can I start trotting now, can I go faster, I remember how to do that, I wanna go faster!" So when I finally got to that point the horse decided he wanted to go even faster and started to gallop. I'm so proud I didn't fall! 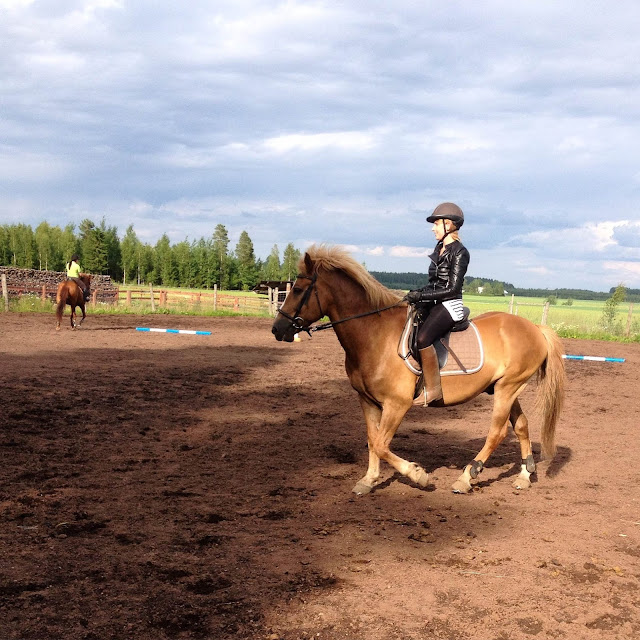 After the hour I felt super! I was sweating like a pig and it took a while to remember how walking was done but I was over the moon! So proud that I could still ride and was totally hooked once again. I've never heard that anyone in Slovakia would ever have had riding as a hobby but I intend to find out if there's some place where I could go. I've been wanting for a hobby.

The stables were part of a farm estate, Kanniston Tila, which has loads of other animals as well, some of them quite exotic. Like llamas, peacocks, reindeer, donkeys, bunnies, sheep and a huge saint bernard named Pablo. Pablo was kept in an enclosure because it can be quite wild. But obviously I had to go in there in order to give it a hug. It was a mistake! I now have an inclining of what it feels like to be attacked with intentions of rape. 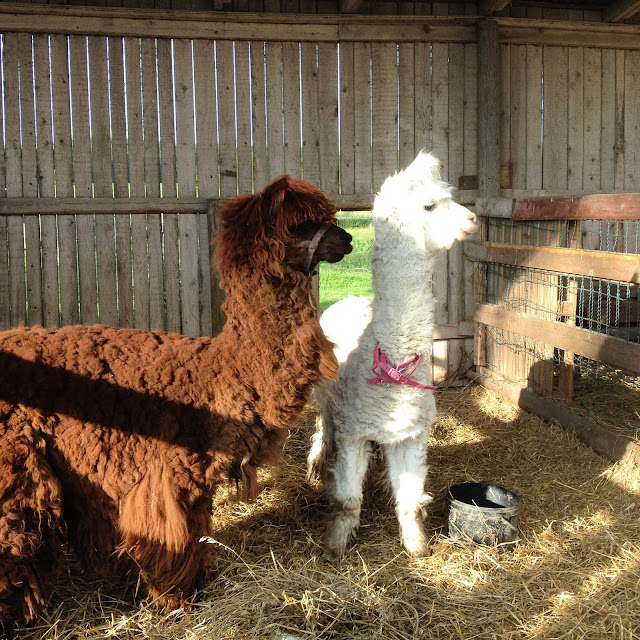 The time that I didn't spend in the summer house I spent in my darling Turku. The best city in Finland. Although, I couldn't do the things that are best there because of the weather (see picture below): spending time sunbathing and drinking on the river boats. Better luck next year...

I discovered a dessert restaurant that sells the best cupcakes I have ever had! Saw friends, some of which I haven't seen for years, borrowed the two fur-balls as often as I could and visited Helsinki. Was daily shocked with the prices for anything and everything and ended up using way more of my savings than I would have expected considering the weather (instead of going to a terrace every day I went maybe altogether five times). 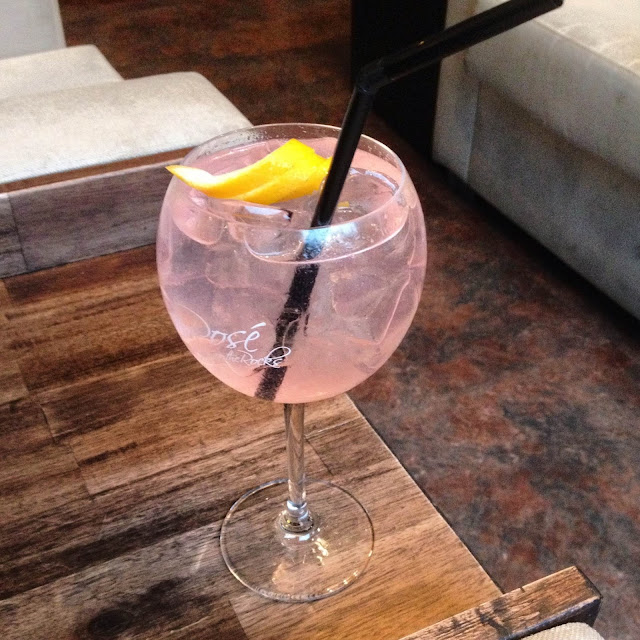 It's not a vacation if it's not long enough for you to forget that you have a job and a set of responsibilities somewhere. For me the vacation did just that, so much so that multiple times I've even considered I might start checking if there might be some interesting jobs available in Finland. But then I watch the news or read the headlines of tabloids screaming how unemployment is the highest probably ever and I'm brought back to reality. On top of that if the weather has been shit during my vacation it will only get much worse from August on.

So, even though it would be much more comfortable to live closer to my family and friends in a country where I understand the language and the culture fits into my world better, it's still not worth quitting the job that I have and returning home to be unemployed. It's a shame that my country's in such shit, but then again I don't think I'm ready to settle anywhere yet anyway. 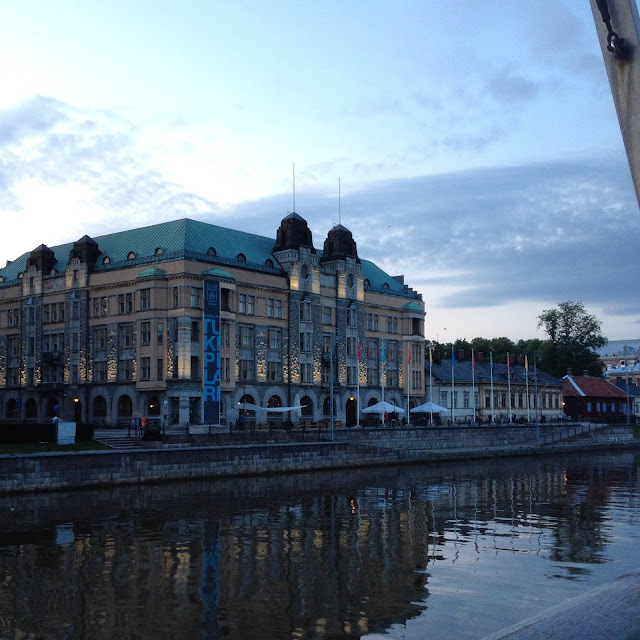 In the end as many positive points as I can find in living abroad, it is still hard. The language barrier presents challenges every day and I've started to notice from how different a culture I come from compared to here.

The flight back was absolute horror, the plane was thrown this way and that and I even wailed at some point in panic. As much as I didn't want to leave by the time I was on the bus on my way to Bratislava I got the familiar feeling that I'm OK here. And hiring a cleaner for while I was away was the best idea from my landlord: I have never been so grateful as I was coming home completely exhausted and finding it spotless and the bed already made.