lokakuuta 19, 2015
I don't think I'm quite right in the head because I keep putting myself  voluntarily into situation that are far from my comfort zone. This time especially I found myself close to the limit. 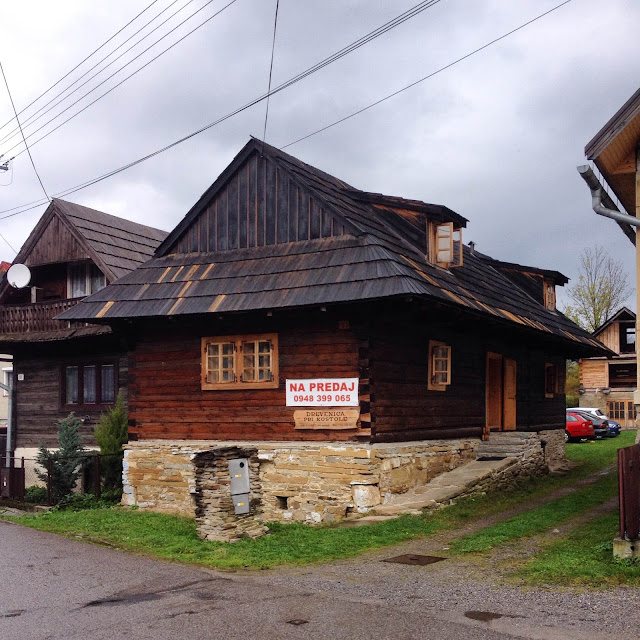 Last time I made the big mistake of drinking too much on Friday. This time I knew better... But I apparently still had one shot too many. I blame the altitude, it fucked up my body because normally I wouldn't have been so hungover on Saturday morning! (Comparison: Turku approx. 10m above sea level, Bratislava 140m above sea level, Zuberec (where our cottage was) much higher.) Not so bad though that a proper portion of scrambled eggs, bacon and a bucket of coffee wouldn't fix! 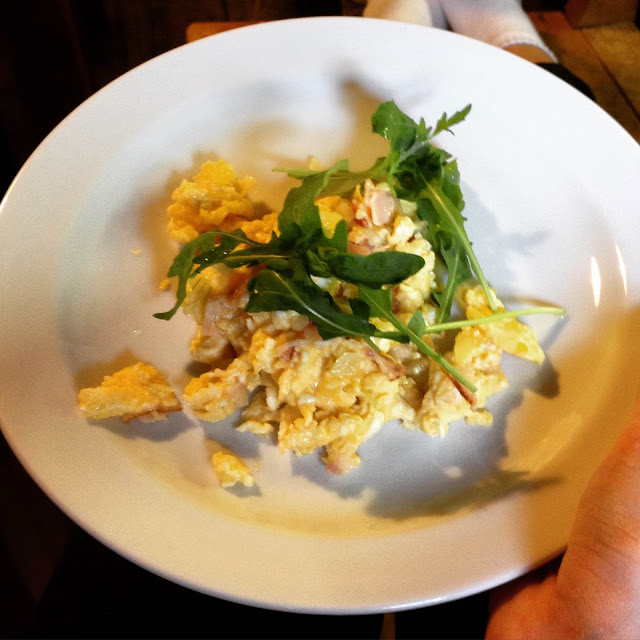 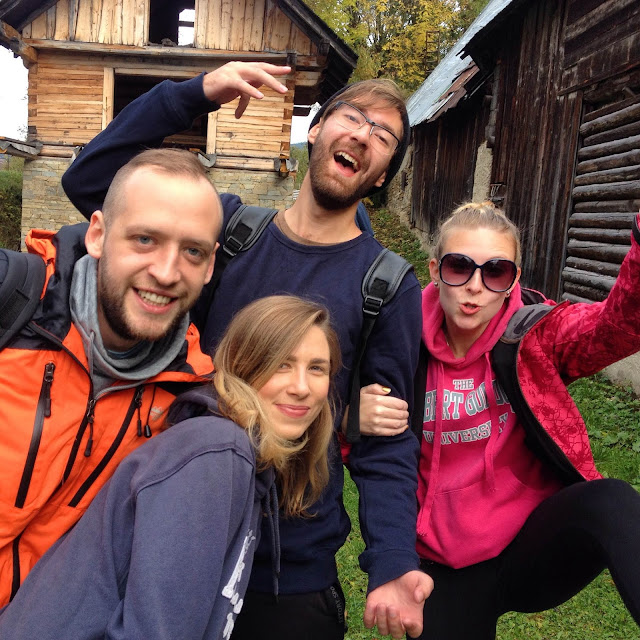 The weather for Saturday was forecasted to be bad. Rain and a lot of clouds. So I comforted myself by thinking that we would take it easy. And we did find a route that was supposed to take approximately three hours and which would take us to some mountain lakes. So, we got our gear together and drove to the foot of the mountains. 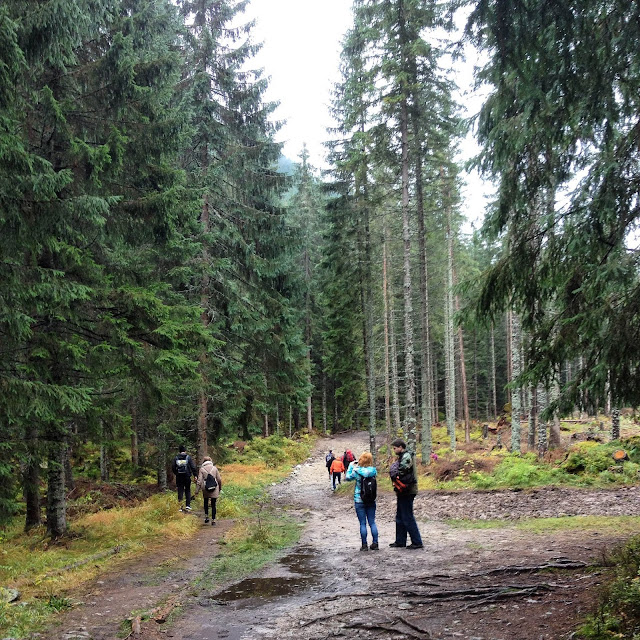 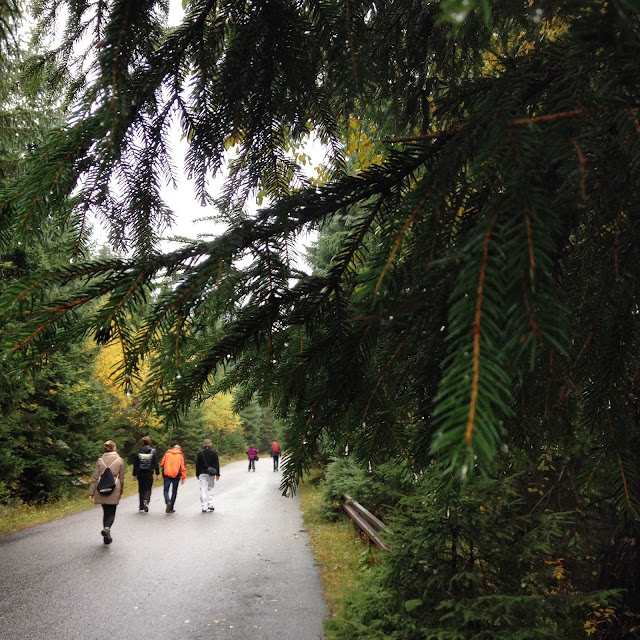 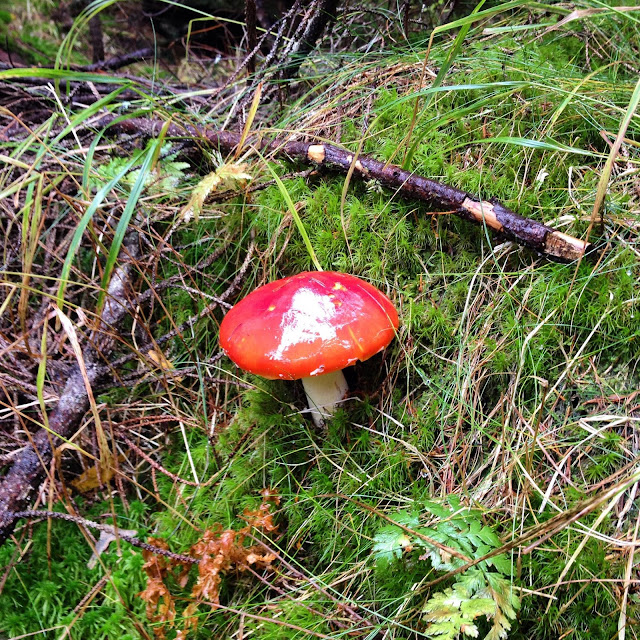 Thank goodness it didn't rain. Clouds are ok, even though they ruined the view in places but as long as it didn't rain we were happy.  The first part was easy: walk through a forest. But then the climbing started. I did surprisingly well at first, I didn't slow the group down and breathing wasn't an issue. But the higher we went the more I struggled. By the time we reached a waterfall I was already out of breath but the break fixed it... I was also in such awe about the waterfall that I forgot about everything else. 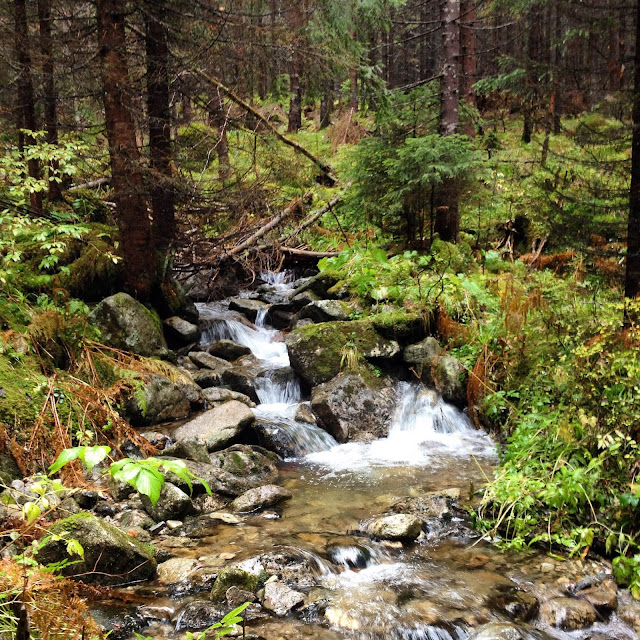 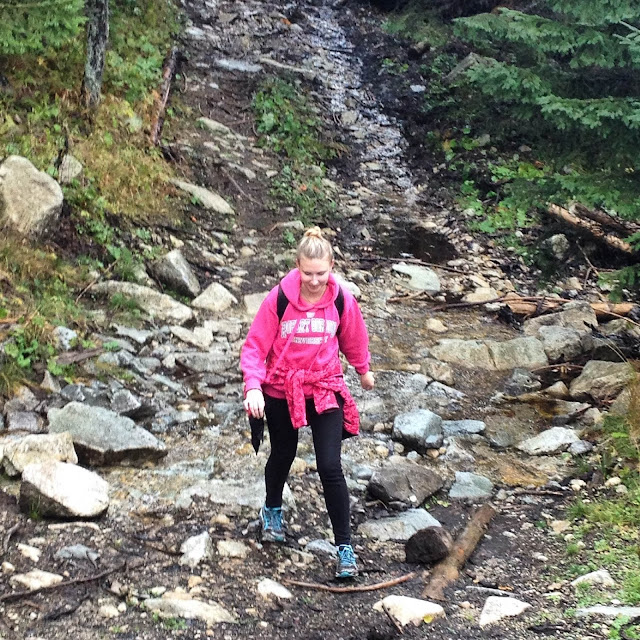 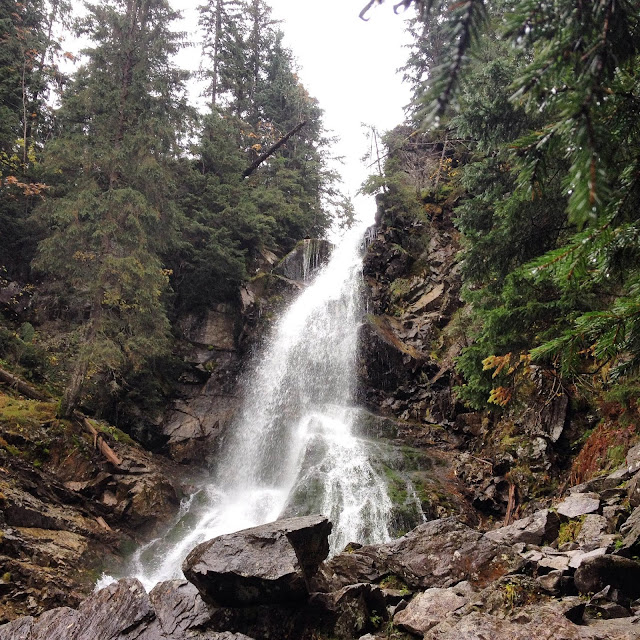 After that we got out of the forest and the path became quite challenging: big rocks that you had to climb over. It would've been nice to look around but there was no chance for that unless you wanted to find yourself on your face. The first part I managed somehow but at the break point I felt quite light headed and faint. And in front I saw this even steeper hill that we still had to climb. 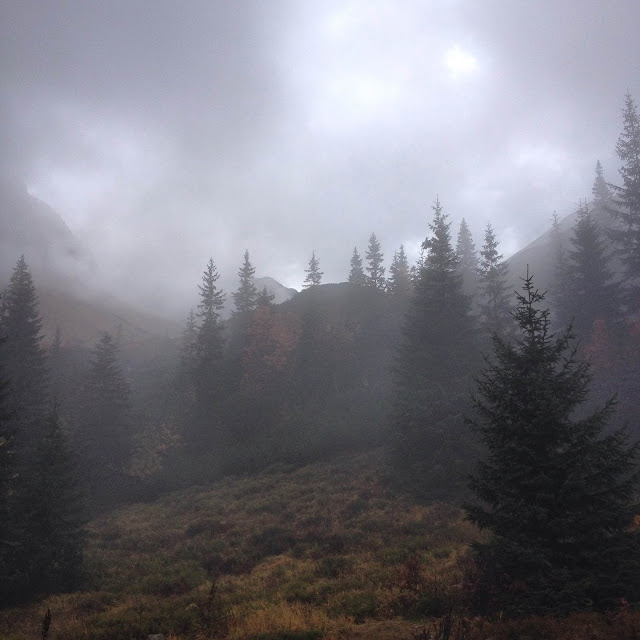 That's when I got slow. I had to stop every few steps to catch my breath. And halfway up I sort of lost the ability to breath. There was no air coming in, just a wheezing sound from my lungs. I instantly went into panick mode "I can't breathe, I can't breathe!!", but as soon as I calmed down and concentrated on breathing through my nose, not mouth, I started to move towards life again. I heard someone suggest that we could go back the same way we came but I was by then so pissed off at myself that there was no chance of me going back. I would get to the top, if it kills me then so be it but I'm going to the top! 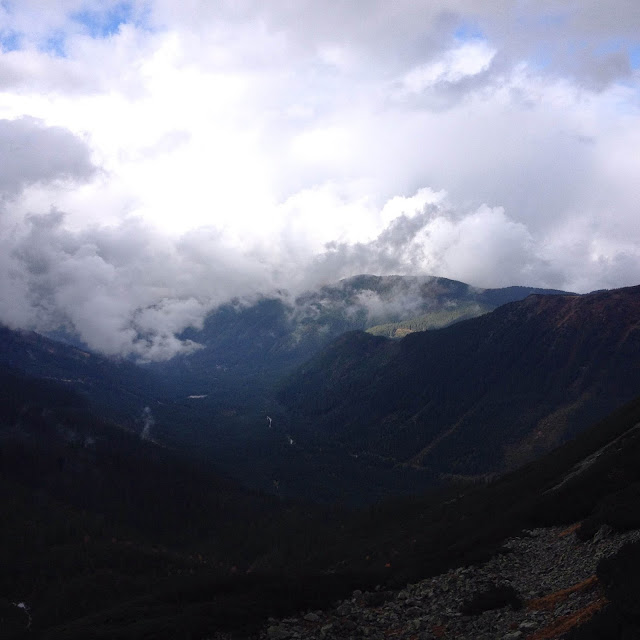 Maybe the whole thing would have been a little easier if I had had my fellow sufferer there with me, but half of the group had fallen behind, Orsi with them. Still, the rest of the climb was "easier" to some measure as long as I concentrated on how to breathe.

But then you reach the top. And that feeling is why I put myself to this sorts of situations! It is such an amazingly awesome feeling when you have totally overcome yourself that it beats everything else.

The scenery helps as well. Is there anything cooler than to stand above clouds? No there isn't! 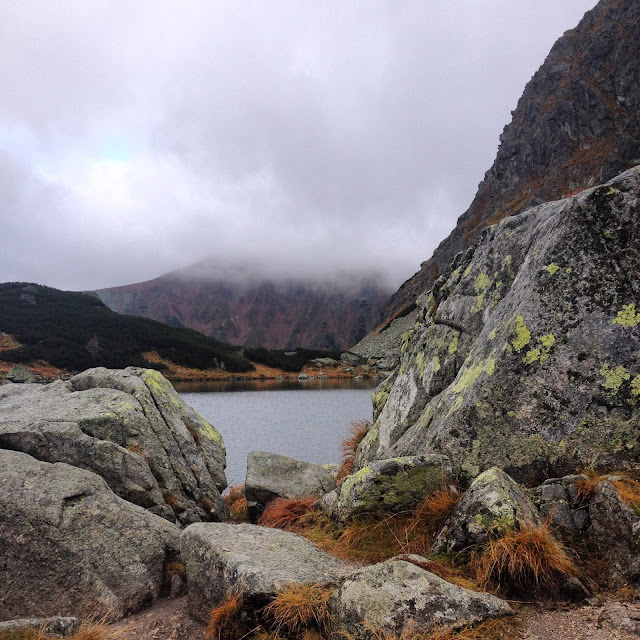 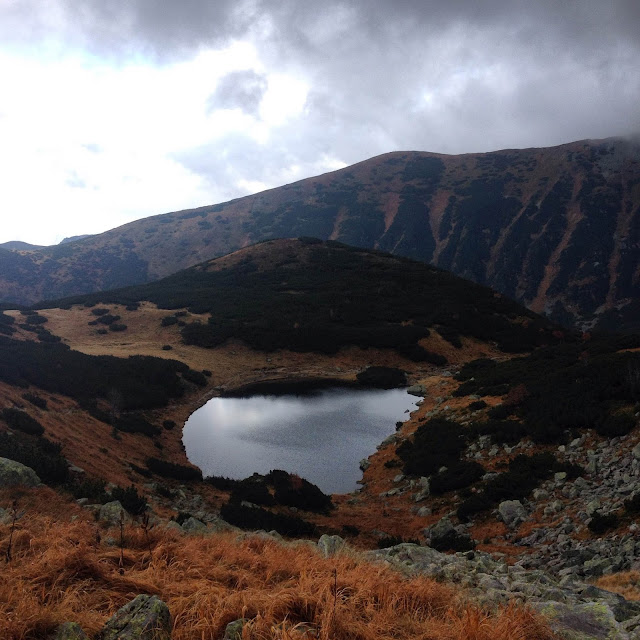 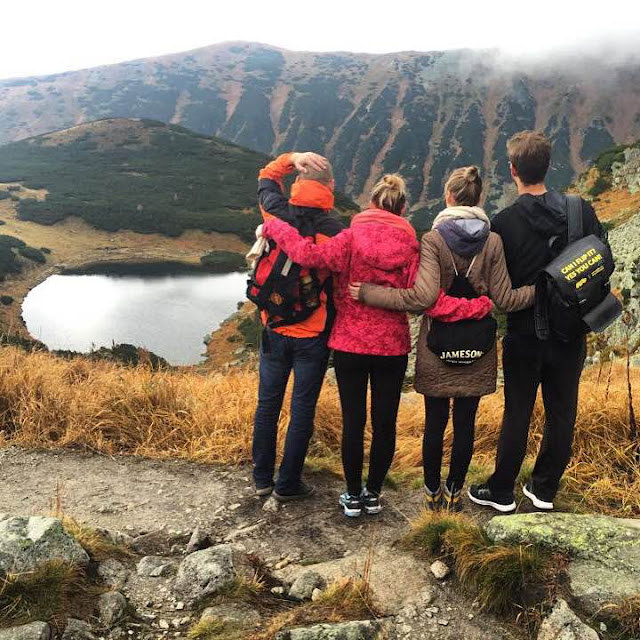 Our main destination were the three mountain lakes on the top. It's weird to think that there can be lakes literally in the sky. Where does the water come from? That I do not know (even after Googleing) but what I do know is that I have never seen such clear water. When it's totally still you might not even see that there's water, that's how clear it was.

Our surroundings there brought to my mind one word to best describe it all: Mordor. Except without a volcano. There were big and bigger rocks everywhere and the colour scheme around us was plain gray, dark green and bright orange. Amazing. 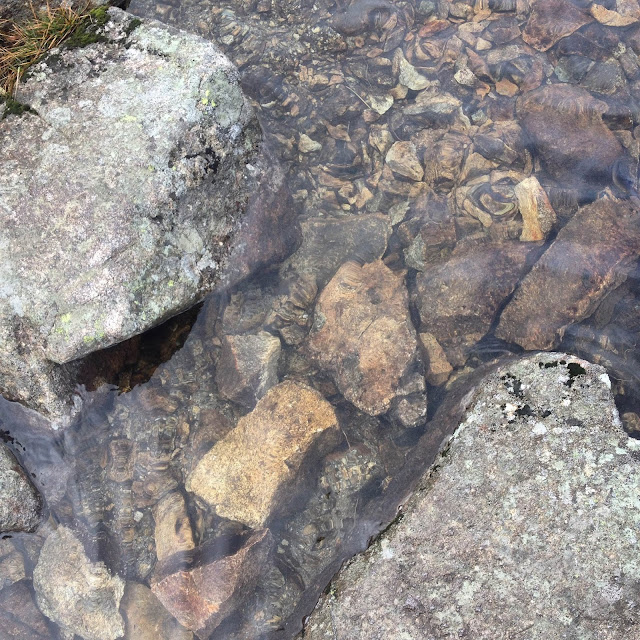 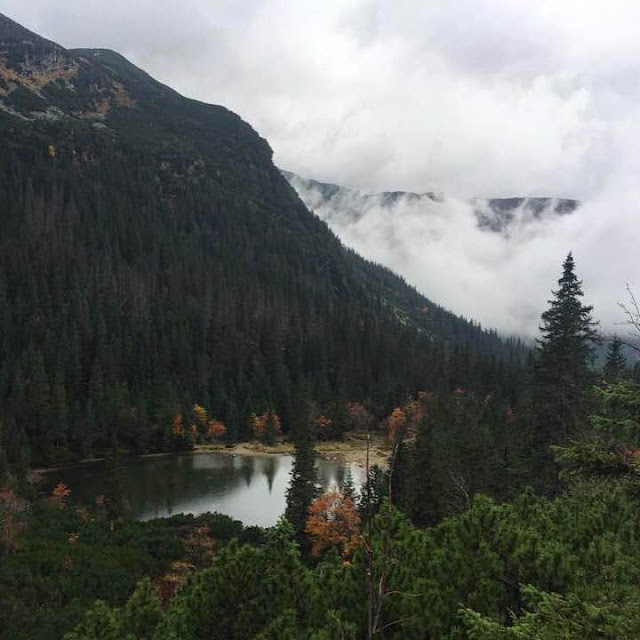 The walk back was obviously easier, although for someone who suffers from balance problems I would not recommend this route at all. Spiky, jagged rocks made up the "path" down. The lower we got the better I felt. Up there I had really felt like I could just faint any moment, I was so light headed. By the time we got to a "restaurant" I felt completely like myself again. We ordered some soup and waited for the rest of the group to catch up with us. And when they did we found out that the rain that had been forecasted had actually happened, it just traveled behind us making the trip even worse for the others than it probably was for me at any point. The rain reached us only the minute we stepped into the restaurant.

When we got back to the cottage everybody retreated to their rooms for half an hour; some to sleep, others to swim through, share and Instagram all the pictures from the trip. 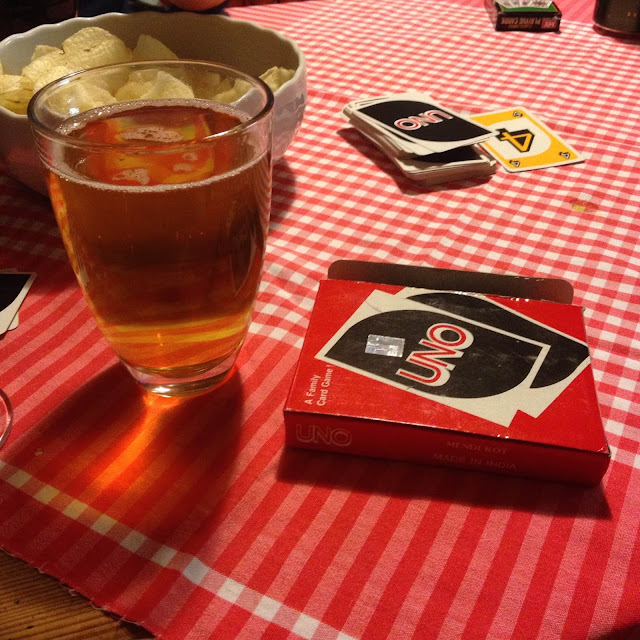 I was surprised I wasn't more tired. It also seemed that I was the only one whose knees were not aching even though I'm the one with the retard ones. For dinner we made some sausages, roasted potatoes and salad. As simple as it sounds, and even though the only spice we had available was salt, it was so good! You know that blissful feeling after a very satisfying meal? Multiply it by 5 and you're close. While we waited for the dinner we played my childhood favourite card game: Uno! And instead of enjoying it much we just fought about the rules because we all seemed to have different ones...

It must have been between 1 and 2am when we finally crawled upstairs but me and my roomies kept gossiping still for a while. Apologies to all who we kept awake! I do love these trips and I'm already looking forwards to the next one (although there won't be any this year anymore because snow is arriving to Tatras). I'm so thankful for having such awesome team mates, current and former, because in the end without such great company there would be a big chunk of fun missing!